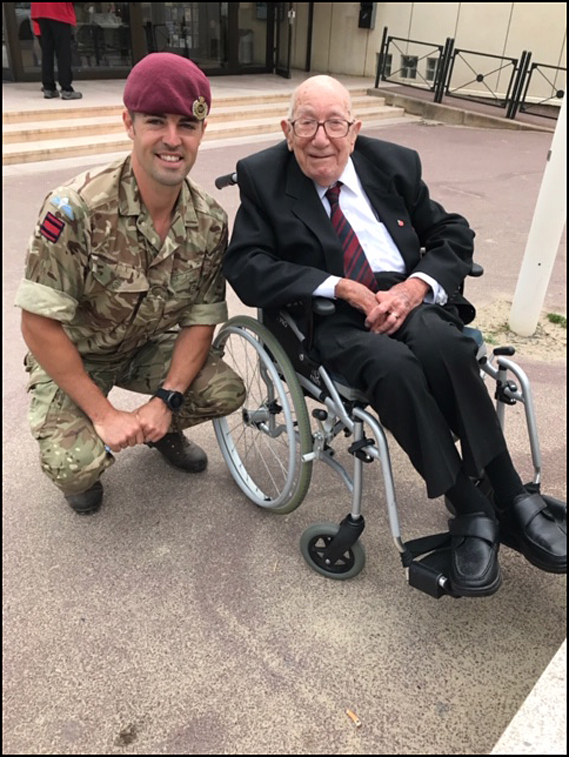 Posted at 14:03h in Information circulars by Robert Stutely 0 Comments

Dear Reg, I had a phone call from Harvey Wild this morning reminding me that it was 80 years ago today that we first met at HMSO, Hollinwood. I thought it was slightly earlier but as I cannot access my old staff list I could not argue. He seemed in high spirits just suffering the inevitable aches and pains. From being the rebel of those days he has now become the ultimate conservative (small c) as, since retirement, he has refused to have anything to do with PCs, laptops or iPads – such a shame but he remains as obstinate as ever! He was surprised that I was still going back to Normandy and I sympathised with him over the complete lack of commemoration of the capture of Rome on 5 or 6 June 1944 by the 8th. Army – he still remembers their being called the DDay Dodgers – quite unworthily.

I am forwarding a letter (below) that Hilary sent to a friend met through the DDay ProAM as it is as good a summary as any of our few days in Normandy for the 75th. Anniversary. A couple of points of explanation. The WWII hero calicos that she refers to were part of a scheme that the Calvados Regional Council introduced whereby every beach community from Ouistreham in the east right through to the American Utah beach was invited to seek out photos of veterans associated in one way or another with that community as they were at the time of landing and display these photos in the form of calicos on the beach road. The mayor of Asnelles asked me for my photo but when I sent it to him I objected most strongly to the word hero. Sure, there were many heroes in those days but I never counted myself amongst them. But my objection was clearly overruled. Other people so honoured by Asnelles were the brigadier commanding 232 brigade, his a.d.c., the last survivor of the South Wales Borderers who died just after the 70th Anniversary, and Maurice Schumann, founder of the European Coal and Steel Federation (precursor to the Common Market and EU) who broadcast regularly to the French from London during the war and was a son of Asnelles.

Hilary refers too to the ‘exultation’ – she meant of course the ‘exhortation’, the verse from Lawrence Binyon’s 1914 poem, “They shall grow not old” etc. normally read before the Last Post.

I will be sending you another note after this when I will explain who the gentleman is who is sharing our champagne elevenses.

Dear Scott, How wonderful to think of you in Port-en-Bessin and at Omaha Beach Golf Club. We did have a wonderful time in Normandy, last week. We avoided all the brouhaha of Arromanches, Bayeux etc and the extensive road closures & inevitable traffic jams. We were the ‘other Normandy’ – full of little ceremonies away from the limelight.

We risked going into Arromanches on 4th June and we’re so fortunate to find the roads clear and the car park open! We went into the museum and met the curator, a young, knowledgeable chap, who was so interested to meet a veteran with such excellent French and engaged Dad in conversation for more than half an hour. As we left, we met a young Royal Engineer . . . who recognised Dad’s tie and who had been involved in installing the Chelsea Garden up on the cliffs.

So then we had to visit the garden – sadly, it was raining but it’s worth a trip if you haven’t seen it. 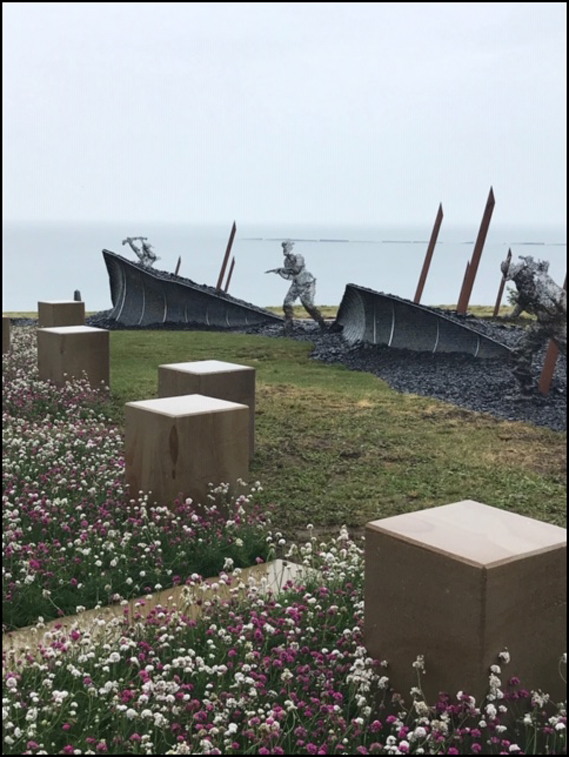 And do look out for Dad’s ‘calico’ in Asnelles – although they know him as Les Birch somehow, in putting his full name, they omitted his surname! 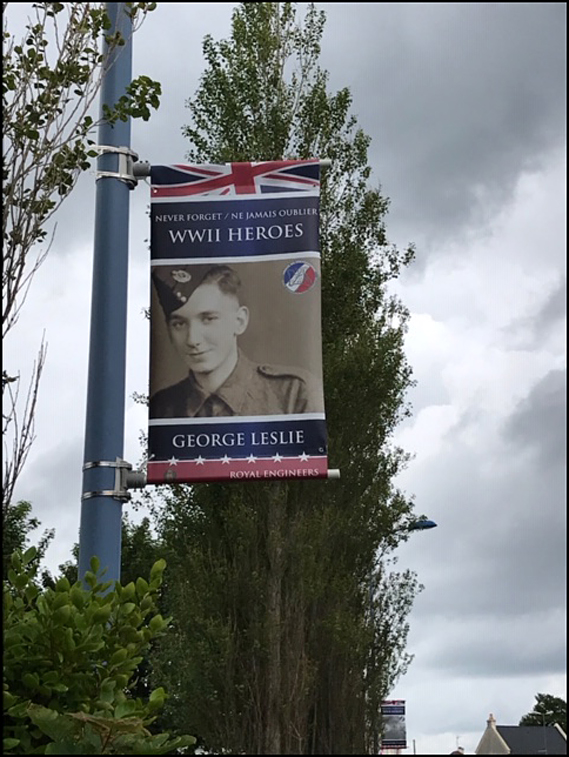 Another first, in Asnelles, he was asked to sign an American truck driven by a young Belgian! 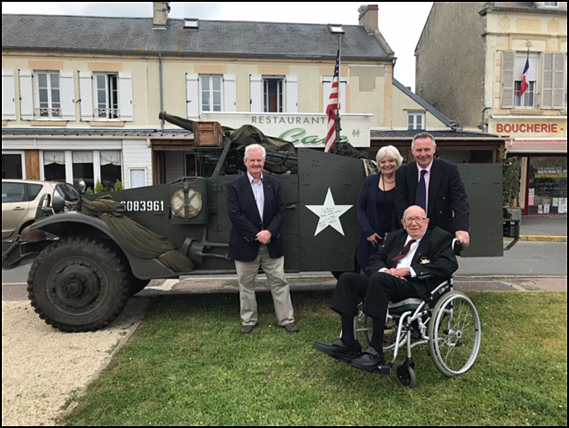 Very moving ceremony with 47 Commandos at the blockhouse on Asnelles seafront on morning of 6th at which Dad was the only veteran and asked to give the exultation – they have sort of adopted Dad as an honorary veteran.

We enjoyed a little break after the early morning start. 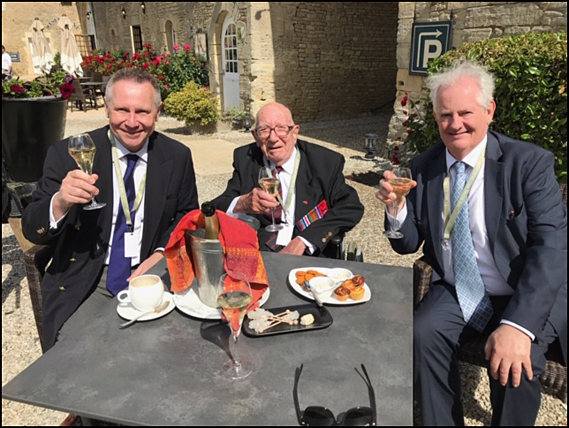 All Dad’s French friends came out in force and he was fêted by all, young and old alike – very special.

One last bit of luck, on the drive back to Ouistreham, on Saturday, I spotted a Union Jack and Tricolour flying high up on a hill just outside Ver and asked the boys if they thought that could be the Memorial site. I was right and we arrived at the tail end of some sort of ceremony – no veterans present so when Dad turned up he was an instant ‘celebrity’! The Yorkshire Brigade asked if they could be photographed with him and The Trust asked him for an interview! I do hope you get there as I gather the site closed on Sunday so that work on the memorial can get started! 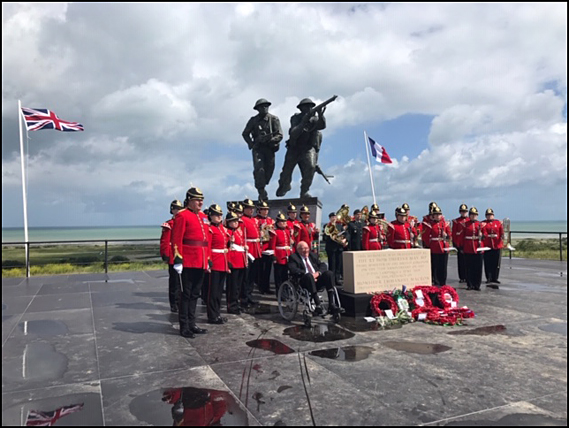 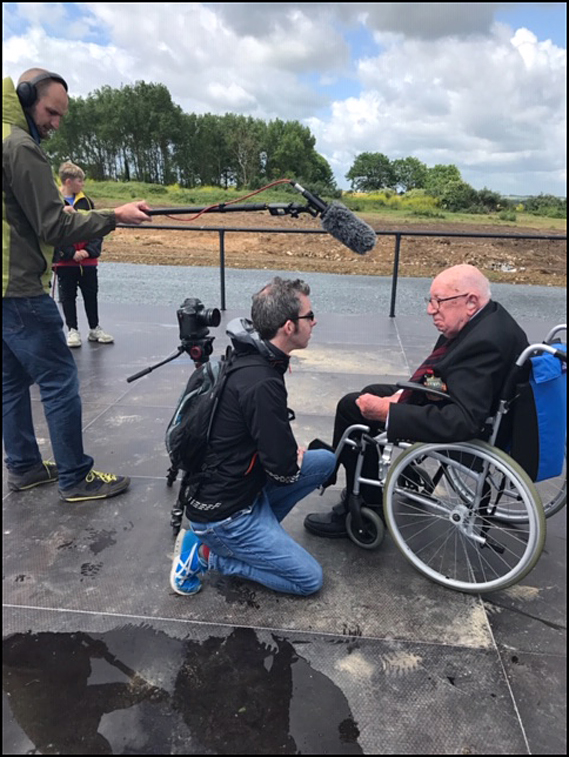 Just a little taste of some of the highlights of our trip – quite different to the events broadcast around the world but so much more personal and rewarding! The beauty of independent travel.

I hope you have a good day of golf tomorrow and that the weather is better than here, it’s wet and SO cold in London.

Thank you again for your kind words and support and for keeping in touch. We are greatly looking forward to seeing you (all?) in October.

Much love to you, Chie and Alisa

I have been thinking about you a lot over this past week. Your piece for the BBC was sincere and very dignified, as was their extended coverage of the 75th Commemorations. I hope you agree? I trust you and your family were well treated throughout and that your presence was greatly valued in Normandy by all your friends here.

I hope too that there were moments you could enjoy, but I equally appreciate that the emotional toll of the proceedings would have been very difficult too. I am going to visit the new Memorial at Ver Sur Mer this morning, so I will also be thinking of you then.

As you can see, I travelled from Paris yesterday to Port En Bessin, where I will be staying until Friday night. There is a golf competition on Friday, so I will be seeing all your usual set of chums. This is a special place and we are lucky to have so many true friends here.

You have been an inspiration to me since the moment we first met. Not a hero, because I am sure none of you wanted to be in those circumstances you were thrust into by the war. But you have transformed those awful memories into something truly positive.

You have become an amazing ambassador for peace and reconciliation and a friend to France. You have honoured and been a constant tribute over these past 75 years to all your colleagues, both those who survived and those who did not.

You remain a credit to them all and I will take great pleasure in visiting the war memorial later, because I know it meant so much to you to finally have a fitting acknowledgement on the beaches of Normandy.

Keep well and I will look forward to seeing you again in October.

Love and best wishes from all my family.

Hello Les, I – and others – had been wondering, of course, and now we know. What an excellent report on yet another memorable and heartwarming occasion. A unique contribution, and one to send the mind off on all sorts of directions.

But down to the mundane, in answer to your first point. My 1968 Staff List records the following:

So Harvey had it right: 80 years today.

I am currently reading Alan Johnson’s memoir of growing up in London in the 1950s, which mirrors much of my experience, and now your marvellous email is making me reflect upon the lives of my antecedents. As ever, the past has more to offer than the present, albeit not by any means a bed of roses.

All the very best, and thank you again, Reg.

I think you know that my son in law, Colin Lawson CBE, is the Director of The Royal College of Music and the Chairman of the Council is Lord Guy Black who has over the years become a close family friend. His day job is as Executive Director to the Telegraph Group of Newspapers and he is also a keen historian. A couple of years ago he came to Normandy with Hilary and myself on a British Legion coach tour and was so impressed that on his return he immediately booked a private tour with a knowledgeable ex-Colonel, spending over a week going round Normandy. He insisted on spending a few days with us there again this year but he had been due to speak in a Lords debate on the 75th. Anniversary on 6 June. He asked a fellow-Lord to give his apologies to the House saying that he was at the time in Normandy with a 97 year old veteran, Corporal later Sergeant Les Birch who together with his fellow Royal Engineers had landed on D plus 1 to work on the Mulberry Harbour. On his return to the House he was asked to write a piece about his visit for The House, a journal published by Parliament and circulated to all MPs and members of the Lords.

And this is what he wrote and again I think it sums up the experience far better than I could. 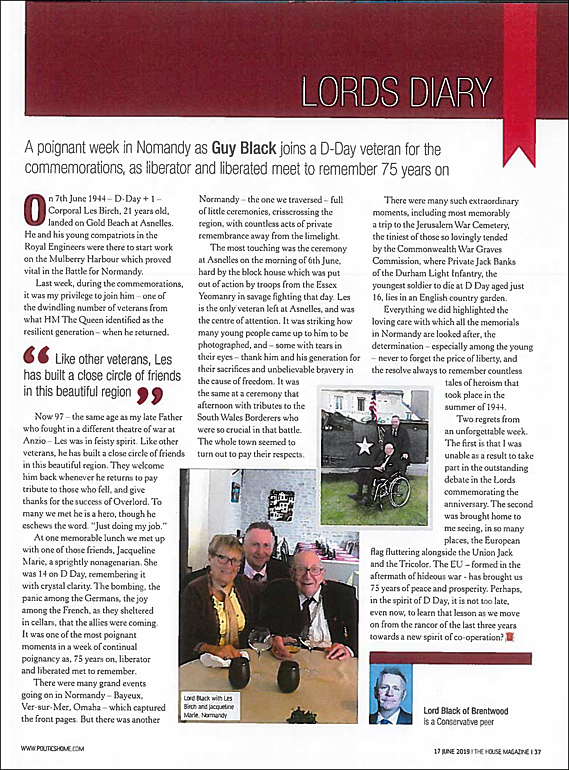 Click/tap to enlarge image then click the new page again

We are already booked in for the DDay ProAM 10 to 12 October so you may get some more pics then.

Les, Just when I thought it couldn’t get better – what a marvellous conclusion to your previous post. All makes me reflect upon my own unmemorable life – as they say: ‘there’ll never be another!’ No doubt October will bring more tales. Can’t wait.

All the very best, Reg.