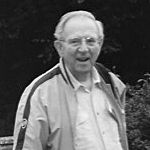 This is an email I had hoped would not be necessary to send. It is with great sadness that I have to report the death of George York – a long time chum and valued ex colleague. He died earlier in the week but not as I understand Covid19 related. It is particularly sad because we were hoping he would achieve his 100th Birthday in December, thus becoming one of the few centenarians the ‘old firm’ has clocked up. Because of all the difficulties with arranging funerals at the present time there is no further news on this score.

George was born on 12 December 1920 and joined HMSO on 1 May 1948. He was mainly known for his work with CRS, the innovative area which assessed the merits of what was then new technology – photocopiers, microfilm, word processors etc.

Upon retirement, he moved from the London area to March, near Peterborough.

George at the back with John Nash at a CRS gathering and on the right George in his garden following retirement.