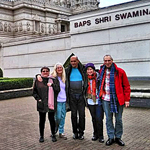 Posted at 00:00h in Information circulars by Robert Stutely 0 Comments

A CSSC group visit to BAPS Shri Swaminarayan Mandir at Neasden on Saturday 15 Feb saw the gathering of a few HMSOldies, namely Barbara and Brian Cockram, Pauline and Kevin White and Helen George. 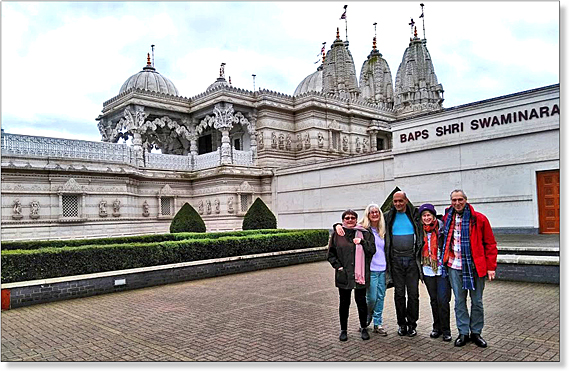 Storm Dennis did not deter us although we were met by quite heavy squalls later in the day. We had a guided tour at 11am but arrived early to admire the wonderful limestone carvings on the outside of the temple. Our guide gave us background to this impressive temple, built by 1,000 part time and 100 full time volunteers in just 3 years. The Mandir is a traditional place of Hindu worship designed and constructed entirely according to ancient Vedic architectural texts – using no structural steel whatsoever. The internal decorations were of white Carrera marble and exotic wood carvings and showed incredible workmanship.

We were able to watch the Arti (fire) ceremony then visit the rest of the temple which is not only a place of worship but a very busy community hub. Our group then visited the temple’s restaurant for an Indian lunch and visit to the large Indian food market attached. We followed it up with a visit to Southall for more shopping. This year is the Mandir’s 25th anniversary and there are many celebrations organised so if you find yourself in North London take an opportunity to visit. You won’t be disappointed.