Posted at 18:17h in Information circulars by Robert Stutely

Hi Reg, just been reading the latest HMSOldies about Atlantic House and the memories it jogged for you. In them you mention one Gordon Stein. By any chance was he a tall thin Scotsman who supported Hearts?

Hello Bill, My word, you have the ability to get those old grey cells moving. In this case, 52 years. When I moved from ITW1c Cornwall House to S6b Atlantic House in December 1965 it was my good fortune to work with HEO Charlie Lloyd, EO Irene Allen – who had a lot of sick leave, so Scotsman Tommy Taylor deputised. Another Scot, Johnny Muir, was CA – and the other CO was a tall thin Scotsman, who could well have supported Hearts – it was certainly one of those Scots teams: Gordon Robert Stein. Staff List tells me he was born 20.08.1944, joined HMSO 28.06.1965. He was certainly a man who ‘said it how he saw it’ and I was pleased that I got on well with him, and the others on the section. He did not come to Norwich on dispersal, and went to work for a commercial firm in London. In the early 1970s I saw him by chance on a family day out in Cromer. Anyway, I have a crumbling black and white photo of the Supplies Machinery Christmas Party held in Atlantic House in 1967. I was on the bar, with John Butler. 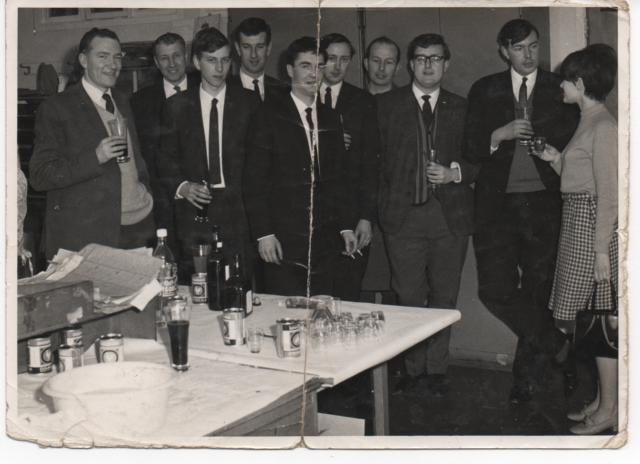 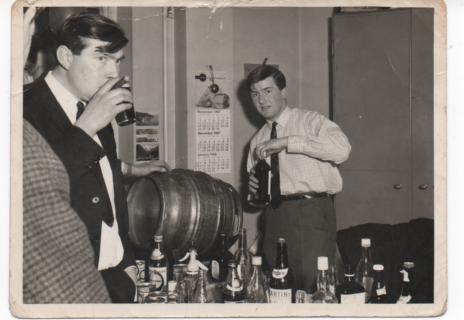 This other photo is of John Butler and me at the bar. 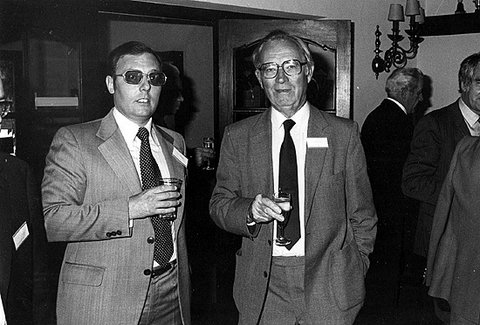 And while I was looking for photos I happened upon the one of you and E Sidney Brooks, who would have been 100 in January 2022 had he survived. Jim McG, Harry Teedon and Isobel are all still around the Norwich area.

That’s the lot for now.  Thanks for the memory-jog!

Bill Greenaway adds: Blimey Reg, Wikipedia has got nothing on you! Lo and behold it is indeed the Gordon Stein I remember. We used to share digs in the old London Hostel Association Hostel at 63 Gloucester Road in Kensington. Knightsbridge 8866 was the phone number. And that came out of nowhere! I had forgotten that Gordon worked in HMSO. At that time I was in the Admiralty and I spoke to him about HMSO before deciding to apply for the relocation. Gordon didn’t fancy it at all and was doing a Bookmakers’ course in settling bets to prepare himself for leaving the Civil Service for the private sector. We both liked a wee bet! I never found out what he eventually did. I used to play football for the Admiralty but I remember playing with Gordon for HMSO on a couple of occasions, albeit against the rules, when they were short. In one memorable match, played in a gale, we scored the most spectacular own goal from a 60 yard backpass which ballooned miles over our keeper who was well out of his goal. Never seen another like it since. Jim McGregor would have been spitting nails!

The old grey cells are definitely not moving as well as they did but every now and again something connects. The photo of Sid and myself brings back lovely memories of a trip of several days we had as HMSO representatives to an EU Government Booksellers’ shindig in Luxembourg. I took my wife to find that all the other country reps had also taken theirs and a totally separate itinerary had been laid on for them. I think more time was spent at lunchtime receptions and evening feasts than in Conferences. A fine time was had by all with the only downside in having to return to HMSO the readies given to us as subsistence etc. in a brown paper envelope (I kid you not) from EU coffers. Happy days.

Keep up the good work on HMSOldies and many thanks for digging out these memories. Look after yourself and with any luck I might actually get up to Norwich sometime this year.

All the very best Reg, Bill.

Excellent, Bill: I’m glad that the connection is right. I have also copied in John Eason, who will have connecting memories. And will be impressed, as of course am I, by the instant recall of the telephone number. I knew that Gordon was in a hostel – lucky devil: those of us who still lived at home were denied the excitement of real London at night. And such vivid recollection of the football match.  Bet you can remember the colour of the socks (that’s one for John Eason: his Mastermind Specialist Subject). Gavin Turner and Leon de Brunner worked with Sid Brooks on the MDC Nine Elms project (I came along later) as you can see from the photo below. Great to have been reminded of the rare oul’ times, and hoping to see you in Norwich come the day. 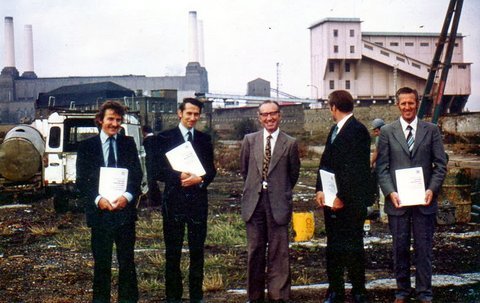 John Eason adds: I certainly remember Gordon. He almost seems to be joined at the hip to Tommy Taylor in my memory. That T Taylor (not the large ex-sailor in Training etc) did a Bing Crosby I seem to recall, that is died while playing golf. Both nice chaps. Never saw HMSO’s football team so can’t give the colour of their socks. They certainly had a good side in the early 60s. Whoever scored the spectacular own goal probably went on to play for Millwall.

Bill Greenaway adds: It’s memory jogging time again, although not the colour of the socks. Usually a muddy brown mixed in.

The photo of the MDC project team dredged up another. I can’t remember the name of the chap on the right but I later became his AD in Cornwall House on my return from Fiji. He was the Warehouse Manager. Shocking memory I have. Anyway, he featured in my very earliest contact with HMSO some years before. As a young OIK in the Admiralty, I was sent one day to Cornwall House to pick up an Act of Parliament being published that day. Unfortunately, it had not yet arrived from SSPP and I was given a seat in the packing room in the warehouse to await its arrival. The Supervisor left the room to collect something and whilst away the phone rang. It was picked up by a warehouseman passing through with the retort ‘Allo and the immediate banging down of the receiver. Immediately one of the warehousemen at the packing table (he was an FOC but I didn’t know that at the time) shouted ” that’s it brothers, stop what you are doing, it’s not his job to answer the phone”. Everybody downed tools and they became quite irate at this breach of the rules. After a couple of minutes, the supervisor came back and was dumbstruck at what was going on. He was given a lengthy berating by the FOC for dereliction of duty and putting such a burden on the poor sod who had answered the phone. Abject apologies were proffered and an assurance that it would not happen again.

Unfortunately, it was all so comical that I burst out laughing only to be turned upon by the FOC in a loud shout “is that brother laughing at us”. I suggested they carry on, it had nothing to do with me. The poor supervisor was the chap in the photo. Little did I know that years later I would be the AD in charge of Cornwall House and he would be the Warehouse Manager. Nothing much on the IR front had changed!

The MDC has of course been transformed into the American Embassy much to Donald Trump’s chagrin. The whole area is now one of the most expensive development areas in the world. Even got its own tube station now. Who would have thought it?