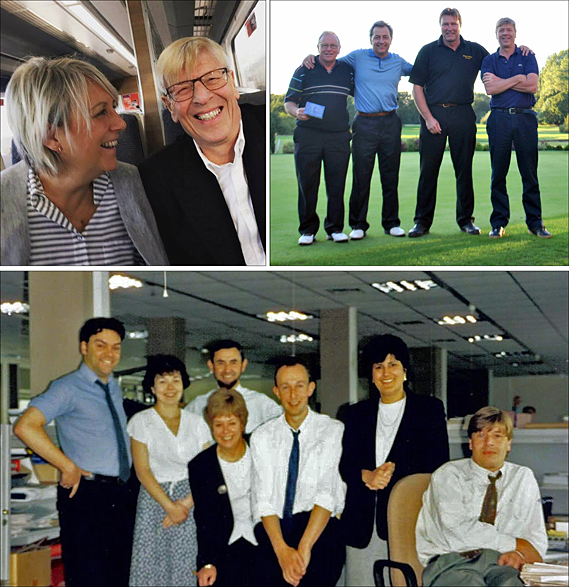 We heard the sad news that Steve died on Thursday 21 March 2019 following a long illness.

Steve joined HMSO Print in Norwich in 1979, where he met and married Jayne. Steve continued to be employed by the post-HMSO privatised company in St Crispins: Jayne left the office in 1996 and their daughter Molly was born shortly afterwards. Steve was a considerable sportsman, centring mainly on football.

Funeral arrangements have been made for Tuesday 9 April, 1230 hours at Horsham St. Faiths, Norwich. Afterwards at The Rectory, Crostwick.

Paul Harvey adds: On behalf of TSO I have been in contact with the Funeral Directors and they have confirmed that it is family flowers only. If anyone wants to make a donation to Cancer Research UK on behalf of Steve, please click here. His daughter Molly is doing the Race for Life and you can donate to her by clicking here.

David Berwick adds: I can’t have been the only person to feel shocked and numbed by the tragic news of Steve’s very early passing on 21st March, as reported here. What can one say at such a time? Steve was my section boss in Client Publishing for a few years immediately before I left the office in November 1999. He was a really fine person to work for and I can honestly say I never heard anyone have anything to say against him. He ran our team very much as ‘one of the lads’ but nevertheless we all had due and utter respect for him as our section head. He was on top of the job, always supportive when you needed it and had a great sense of humour. Those were the days when a bit of innocent banter could be given and received back within the team, as well as exchanged amongst our close publication officer colleagues, without fear of a disciplinary come-back! With publication deadlines to meet there was always pressure within the team, and some light relief at the desk was as essential as the regular lunchtime socialising. 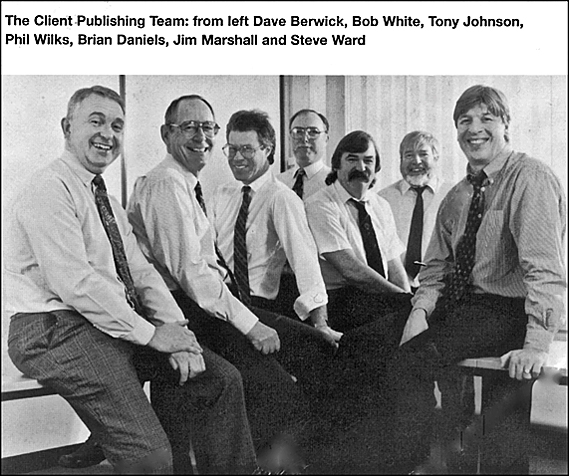 This photograph I would say dates from ca. 1997/98 and was published in one of the office internal news magazines. Mike Yemm was also a member of the team but is missing from the photograph. I’d like to offer Jayne and Molly my warmest and heartfelt sympathy at their immense loss. Rest in peace, Steve.

Thank you David for your thoughtful appreciation. The funeral, at St Faith’s, was the best-attended I can remember. I am told that 240 plus were there, some of whom had hired a coach to come down from Steve’s home town of Stamford. The service was made up of well-considered appreciations and appropriate music: ‘Stand By Me’ by Ben E King, ‘You’re My World’ by Cilla Black and ‘My Girl’ by Otis Redding. Plus a communal singing of ‘You’ll Never Walk Alone.’ In all, a very moving Service. Best wishes, Reg.

Jayne Ward adds: Dear Reg, Please could I ask you to forward my thank you to all Stephen’s work colleagues who attended on Tuesday to say their final goodbye to him, and in doing so making his send off just as perfect as we could have wished for. Both Molly and me were prepared for a large number of people attending and were even a bit concerned that the venue after the service would not be able to cope. However they did a sterling job in managing the 250+ people that did come back to share their memories of him with us. I would just like to apologise to anyone that I was not able to get to speak to on the day and convey my thanks in this email. I just didn’t know which way to turn at some points throughout the day and although it was both emotionally and physically draining it was also very warming that there was so much love and respect for Stephen. It is obviously going to take a very long time to adjust to a life without him in it but I am very thankful that I was blessed with 38 wonderful and memorable years to call upon in times of sadness and despair and Molly 21 years.

Many thanks, Jayne and Molly

Hello Jayne, How good of you to write at this most stressful time. The service was excellent, and I know it touched the hearts of those many friends I spoke to on the day. It must be a comfort to you and to Molly to be reassured of what you already knew: that Steve was a very popular man in all walks of life, and will be dearly missed- obviously most especially by you both. Should you wish to make contact with anyone in future, and think that we can help, please don’t hesitate to ask. For now, very best wishes to you both. Reg.

Jack Keating adds: I was saddened to hear the news about Steve Ward “Wardy”. I first met him through my son-in-law when he was playing football. In 1989, before I was to have an interview with HMSO in St. Crispin’s, I called into the White Lion on Oak Street for a pint and Steve was in there with a few others from HMSO. He and some of the other guys gave me “advice” on what I should say and do during the interview. I ended up working under Robert Stutely for a year before ending up in Electronic Publishing first under Gordon Robbie of that ilk, Alan Pawsey and then John Saville (at least I think that was the order of directors). I left HMSO shortly after privatization and was then asked to come back as a private contractor converting Statutory Instruments from SGML to HTML, etc. before they were put up on the web site. I ended up working about twenty yards from where Steve worked. He was good fun and always had a smile on his face. My condolences go out to Jayne and their daughter.