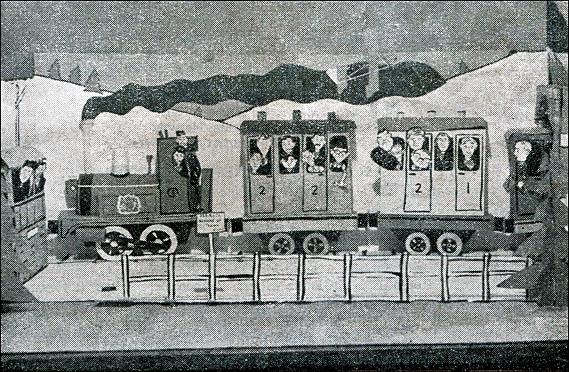 Posted at 15:15h in Information circulars by Robert Stutely

Alex Mackie, who joined HMSO in November 1960, was pleased to feature in this cover article from the S.O. Review dated February 1961. It featured a cartoon drawn by Jack Palmer with caricatures of printing staff in the PG5 area. The caption reads:

‘The P&B Railway on this month’s cover was constructed in Room C90, Atlantic House, as a Christmas decoration. The ‘Engineer’ was Jack Palmer, ably assisted by Robin Butt and several others.  All the passengers, the driver, fireman and the signalman in the box are the denizens of C90 in caricature. On the Friday before Christmas, the train was taken to the Royal Free Hospital, Liverpool Road, to decorate the Children’s ward. Before the train left for the hospital the P&B passengers disembarked and Father Christmas and a party of boys and girls took over.’

Alex has cudgelled his memory and produced the following names:

Jack Horner and Alan Ramsey also in there somewhere!’

Other photos from the magazine show some famous faces – and famous names among the Atlantic House Gossip.

Fred Stubbs adds: Great stuff – I remember it well! Jack Palmer made a marvellous model (most in work time, but say nothing!). In the last carriage is Bernard Downing – Len Knight was the TO, I worked alongside Bernard for a while.

John Eason adds: What a goldmine! Resignation of Daphne Chamberlain. Guess who took her place! After an hour or so in Pubns (listening to Lily the tea singing Are you Lonely Tonight?) I was transferred to Supplies. My first weeks were largely spent answering phone calls from departments hastening demands that had gone home to chez Chamberlain never to be seen again. And one of the boys at the bar was Jimmy “he who steps from speeding bus” Stokes, a messenger who turned up for work no matter what damage he sustained the night before.